Code39 also known as Code 3 of 9 allows you to encode text using characters A-Z and 0-9 and some punctuation. Using an extended encoding system, it is possible to encode the entire ASCII character set. 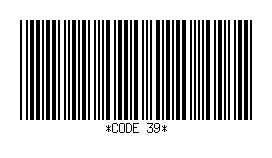 Each character is made up of 10 elements where 5 are bars and 5 are spaces. You may have seen this described as 9 elements on other sites where 5 are bars and 4 are spaces but there is always a narrow space stripe between characters which means we might as well consider that trailing narrow space part of each character making the total number of elements 10. The final trailing narrow space simply appears to be absorbed into the quiet zone to the right of the final barcode. There is no check digit in this symbology unlike others. The variation between the width of the bars is what define the value of each character. 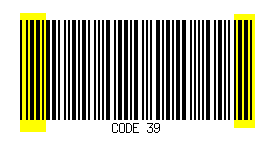 If you want to create your own Code39 barcode, you can visit our very own barcode generator page.